With much of the Texas coast devastated by tropical storm Harvey, Louisiana continues to send help. Lake Charles has become a staging ground for relief efforts.

But a number of neighborhoods in that city were flooded-out, too. Calcasieu Parish got more than 20 inches of rain last week. Flood victims there are feeling neglected. The parish has not received a formal disaster declaration so FEMA help is not available for those who flooded.

Linda Broussard lives in Clearfield Ranch, a little subdivision just south of Highway 210 on the outskirts of Lake Charles. It was hit hard by heavy rain about a week ago.

She says about a foot of water got into the house, so she's gutting it now – ripping out drywall and floors. She had to hire private contractors to do the work and pay with her own money.

Seeing trucks full of bottled water and other emergency supplies heading to Beaumont and Houston, she says, "It makes me feel bad, it makes me feel angry!"

She hopes her flood insurance will cover the damage.

The flooding in Lake Charles was isolated – a neighborhood here, a neighborhood there. Clearfield Ranch is in the low-lying outskirts. Back in town, just a few mile away, another neighborhood was inundated, The Terrace. 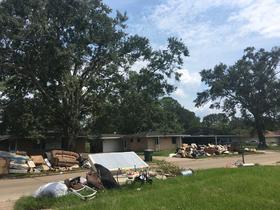 That's where Latoya Ryan lives in a two-bedroom rental with her five kids, on General Patton Street. She's staying with friends and family, and says all of the hotels are full.

Officials estimate about 500 households were flooded in Calcasieu Parish. They're lobbying Congress to declare it a disaster. Officials with the mayor's office say FEMA representatives are on the ground this week assessing the damage.