Dutch Morial And The Police Strike Of 1979

In 1979, Ernest "Dutch" Morial became the first black mayor of New Orleans. He won the election with 95% of the black vote, and just 20% of the white vote. He campaigned on a platform of police reform, but it wasn’t just Dutch who wanted to re-organize the NOPD – they were organizing themselves. They wanted a union, pay increases, and better working conditions. Soon after Dutch took office, the police wasted no time. They staged their first strike, in history. Their bargaining tool? Mardi Gras.

Listen to the Sticky Wicket podcast for free!

As the mayor and his police department stood head to head, the city’s most beloved tradition was on the line. And the press was covering every twist and turn of this three-week power grab. Who ultimately came out on top? And is a win even possible, if there are no parades? Find out what went down, how Dutch performed under pressure, and whether or not the city had his back.

*CORRECTION:The radioi story stays that Dutch Morial defeated Joe DiRosa in the mayoral runoff. DiRosa is identifed as a former NOPD chief. This is incorrect. DiRosa was a city councilman.

Sticky Wicket is part of the “Democracy and the Informed Citizen” Initiative administered by the Federation of State Humanities Councils. The initiative seeks to deepen the public’s knowledge and appreciation of the vital connections between democracy, the humanities, journalism, and an informed citizenry. The Louisiana Endowment for the Humanities thanks The Andrew W. Mellon Foundation for their generous support of this initiative and the Pulitzer Prizes for their partnership. This radio series and podcast runs in tandem with four articles written in the Louisiana Endowment for the Humanities’ 64 Parishes magazine, and is also in partnership with Louisiana State University’s Manship School of Communication. 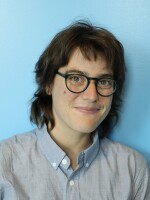 Laine Kaplan-Levenson
Laine Kaplan-Levenson is a producer and reporter for NPR's Throughline podcast. Before joining the Throughline team, they were the host and producer of WWNO's award-winning history podcast TriPod: New Orleans at 300, as well as WWNO/WRKF's award-winning political podcast Sticky Wicket. Before podcasting, they were a founding reporter for WWNO's Coastal Desk, and covered land loss, fisheries, water management, and all things Louisiana coast. Kaplan-Levenson has contributed to NPR, This American Life, Marketplace, Latino USA, Oxford American (print), Here and Now, The World, 70 Million, and Nancy, among other national outlets. They served as a host and producer of Last Call, a multiracial collective of queer artists and archivists, and freelanced as a storytelling and podcast consultant, workshop instructor, and facilitator of student-produced audio projects. Kaplan-Levenson is also the founder and host of the live storytelling series, Bring Your Own. They like to play music and occasionally DJ under the moniker DJ Swimteam.
Classical Music for Baton Rouge
Tune in to WRKF Classical on your HD Radio. Listen online. Ask your smart speaker to "Play WRKF HD2."
Connect with Louisiana's newsmakers
Weekdays at 9:00 a.m.
Listen