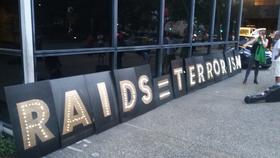 The Trump Administration has deported almost 85,000 people for about half of this year.

In New Orleans, many immigrants are worried about their future. Hundreds held a candlelight vigil last night to protest deportations.

Leti Casildo says the New Orleans Police Department has a policy against rounding up people for immigration checks, but she’s not sure about other communities.

“Truthfully we do have policies here in New Orleans that ICE and police do not collaborate, but that is exclusively for Orleans Parish. And we know that we’re living in a very wide metropolitan region and many people who are members of our community, they’ll work in different parishes, right? They’ll work in Jefferson Parish, for instance, on the West Bank. It’s not just Orleans.”

Casildo says she came to the US from Honduras 13 years ago. One of her three children was born in America, and the child is afraid when she goes to school that the family will be gone when she comes home.

“Every person who is taken away from our community is one less person to support our local economy, one less parent supporting their children in school," says Taber. "How are these children going to grow up in New Orleans without their parents here?”

Vigil organizers are calling on New Orleans mayoral candidates to speak on the matter.

Louisiana vs Feds: Passive or Aggressive?

Louisiana lawmakers have a love-hate relationship with the Feds. We love those federal funds, but chafe at edicts from Washington D.C.

“We’ve got a federal government that’s telling us how we educate our kids, telling them how they go to the bathroom, telling them everything in the whole world," said Mandeville Senator Jack Donahue in a Judiciary A committee meeting Tuesday.

Does it seem like immigration is the issue on everyone’s lips?

Donald Trump is certainly talking about it.

“We have at least 11-million illegals in the country. Not only the jobs they’re taking, but everything else. And you know about the crime wave,” Trump told Fox News recently.

And Bobby Jindal is following suit, telling CBS News this past Sunday, “People that want to come to our country should come legally, should learn English, should adopt our values, roll up their sleeves and get to work.”

It’s been a favorite theme for U.S. Senator David Vitter for several years.