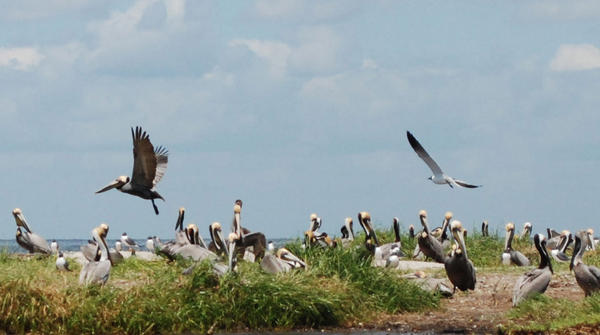 Five years ago on April 20, the Deepwater Horizon rig exploded off the Louisiana coast. Scientists are still studying the effects of more than 3 million barrels of oil that a federal court determined gushed into the Gulf of Mexico. And those evaluating the effects on birds are still unsure what to expect.

Oil-covered pelicans became the icons of what happened when the oil seeped into the marshes on the Louisiana coast. That damage was clear.

What wasn’t as easy to see was the damage done to bird populations closer to the blown-out well 60 miles off shore. Up to a million birds were killed in 2010 due to the oil spill, according to Peter Yaukey, geography professor at the University of New Orleans. And that huge number does not reflect what damage may develop as birds that survived start to age.

BP says that so far, data gathered for the Natural Resources Damage Assessment doesn’t show an impact beyond those birds killed right after the spill. 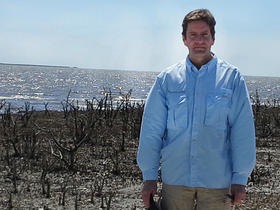 “201,000 brown pelicans were oiled during the spill,” Meffert says. “You know, the complexity is, so where are those birds now? How many survived. And a lot of these went to rehab and were then re-released. The problem is, for the short-term exposure, most of these birds were not tagged or ID’d, and so they were released. But we don’t know where they are, or if they’re still alive.”

Pelicans still live on islands in Barataria Bay. The bay is about 15 miles long and 12 miles wide, behind Grand Terre and Grand Isle in Jefferson and Plaquemines parishes. The National Wildlife Federation has conducted an annual boat tour of the waterway since the spill, to monitor changes.

Its marshes and islands, habitats vital to bird nesting, have been shrinking due to coastal erosion, and environmental groups say the oil made that worse. They say it killed off the roots of mangroves that hold the island soil together.

An example comes into view.

About 300 feet away is a splotch of shells and tree trunks just barely above water, and the boat pulls a bit closer for Meffert to take a look.

Meffert is asked if he’s seen this place before.

“I have. The last time I was here at Cat Island was a year ago and it was severely degraded then, and right now it’s just a vestige of what it was last year.” “That’s Cat Island?” 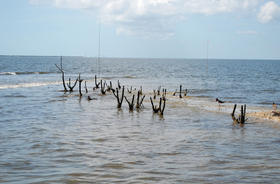 “That is Cat Island. One of the islands here used to be 40 acres in the 1940s and last year we were able to walk on the island and it was not healthy. There were dead mangroves everywhere and there wasn’t a living thing.”

There were a few more tiny island with birds spotted on the way back to Myrtle Grove Marina. But it’s hard to determine just how many there should have been in those remote marshes. Meffert explains.

“Probably the largest data set that exists for birds in Louisiana and, frankly, throughout the United States are our annual Christmas bird count surveys, which are people in their back yards, in their communities, including Grand Isle here in Louisiana,” he says. “But, again, where the Christmas bird count data is, which after 50 years really starts to tell a really interesting trend, it tends to be where people can get there easily. So, again, it’s not at the same places where we were today looking at the oil lands.”

Audubon is organizing a partnership with other environmental non-profits to keep more comprehensive reports on birds living in the coastal areas. And volunteers are being recruited to become, what Meffert calls, citizen scientists.

Appetite For Gulf Seafood Is Back, But The Crabs And Oysters Aren't

In 2010, just after the BP oil well in the Gulf of Mexico exploded, seafood restaurants were bombarded with questions from concerned diners: "How bad is the spill?" "Is this from the Gulf?" "Is it safe?" Demand for Gulf seafood tanked.

"You have to remember, that was literally weeks and months on end when you could turn on the TV at any time of day and see an oil well leaking unabatedly into the Gulf of Mexico," says Brett Anderson, feature food writer for Nola.com.

What to do with all the billions in Clean Water Act fines to be paid by BP and its contractors for the Deepwater Horizon oil spill?

Officially, it’s up to the Gulf Coast Ecosystem Restoration Council, made up of governors from the five affected states and heads of several federal agencies, to decide.

A coalition of environmental groups has come up with their own ideas for how the first millions can best be spent to restore the coast.