Louisiana Eats: It's All Happening At The Zoo. 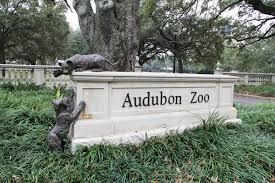 On this week's show, we take a deep dive into the cuisine of our friends in the animal kingdom.

We begin at the Audubon Zoo, where zookeepers forge a nurturing connection with each animal they care for -- especially at meal time. Curators Liz Wilson and Dominique Fleitas invite us along as they make their daily rounds at the Zoo.

Then, we meet the quintessential bar dog, Louisiana Eats producer Reggie Morris's very own Whitey Bulger. Whitey's favorite watering hole is none other than Tracey's in the Irish Channel.