If Canals Contributed To Loss, Why Not Just Fill Them Back In?

Those canals are one of the big causes of coastal land loss. Now a handful of parishes are suing the oil and gas companies over that damage.

It seems like filling the canals back in with soil would be a good way to fix the damage, but that's not part of the state's new Coastal Master Plan.

Listen
Listening...
/
If Canals Contributed To Loss, Why Not Just Fill Them Back In?

David Muth knows the back swamps and marshes of the Jean Lafitte Barataria Preserve well. The park is about 30 minutes south of New Orleans, and Muth worked out there as park manager for more than 15 years. Now he's the Director of the Gulf Restoration Program at the National Wildlife Federation.

Well before the park was owned by the federal government, oil and gas companies went through exploring for oil. 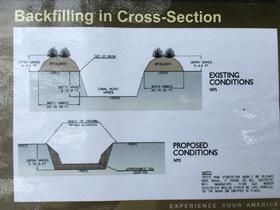 "That was pretty much the history of the industry in Louisiana,” says Muth. "Dig a canal, do a well, and then move on and pretty much forget about it."

Looking down on the coast from above, you see the canals everywhere — straight, dark lines of open water scratched into the light green landscape.

Starting back in the 1930s, companies carved these channels to get their drilling equipment and pipelines into the middle of the freshwater marshes. Canals meant easy access for those companies, but Muth says they disrupted the natural flow of water and acted like funnels for saltwater. That killed freshwater plants in the marsh.

To Muth, the solution is obvious: you take all the muck they dug out of the marshes and piled up on the sides of the canals, and just scrape it back in. 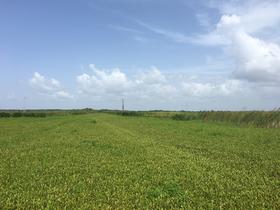 Filling them back in makes them shallower, and plants quickly start to grow back. That's better for the ecosystem, too. Muth says you start seeing more marsh birds and a wider variety of fish.

Every five years, the state's Coastal Restoration and Protection Agency (CPRA) updates its plan to restore the coast. The most recent one was approved a couple month’s ago. It’s full of ideas — like building levees and manmade marshes. Not included in the plan: backfilling canals.

Scott Eustis is a Wetland Specialist with the Gulf Restoration Network. He thinks that's a missed opportunity.

"It's just the first thing you can do to fix Louisiana's coast," he says. "It would restore a tremendous amount of our freshwater marshes."

Eustis says the oil and gas companies responsible for digging the canals should fill them back in. But he also thinks the state should place way more emphasis on backfilling as a restoration technique.

So why is it, then, that backfilling isn't mentioned in the Coastal Master Plan?

Haase says the state uses computer models to figure out what will and won't work. And those models are only capable of testing big projects — projects that are more than 500 acres in size.

Even though all the open water in those canals might add up to more than that, each individual canal is much smaller. So, he says, they just don't make the cut.

Plus, Haase says, most of these canals are on privately owned land.

"We can't go on anybody's property and force them to do something," he says. "That's an individual landowner decision."

He thinks the state's resources are better spent on big projects that will build big chunks of land. But he's not against backfilling. Haase says he actually encourages landowners to fill in their own canals.

"That's certainly something we want to support. We don't want to get in the way of any of that," says Haase

The majority of the coast is privately owned. And so far, very few landowners have been willing to fill in their own canals.

Vice President of the Louisiana Oil and Gas Association, Gifford Briggs, says one reason for that is land ownership is complicated when it comes to these canals. The way some of these contracts work, some companies might not allow them to be backfilled.

"People have probably bought and sold that property a hundred times knowing the canals were there," says Briggs. "It gives them access to their duck leases or out to their fishing grounds or oyster leases."

So until landowners see a value in backfilling, many of these canals will likely remain open.