A New Orleans judicial watchdog group says bail is being set unevenly in Orleans Parish, resulting in dangerous criminals being released while nonviolent offenders get stuck in jail. 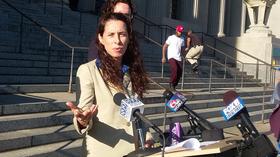 “When judges make pre-trial release decisions based solely on the defendant's pending criminal charges, then we end up releasing high-risk defendants into our community that go on to commit new crimes and who will not return to court — and we cause unnecessary incarceration of low-risk offenders that cost us more as taxpayers and unnecessarily and unconstitutionally infringe on a person's liberty," she said.

As an example, she highlighted the case of notorious criminal gang leader Telly Hankton, who easily made a $1 million bail in a 2008 murder and then committed another.

“That $1 million dollars' bail did not make us any safer," she said.

Levine says there has been some progress in pretrial screenings resulting in more low-risk defendants getting bail, but the group found unequal treatment for defendants using private attorneys over those with public defenders.

The Lens published an investigation in August revealing the Orleans Parish School Board abandoned plans to test school water for lead. Last week, Lens reporter Marta Jewson uncovered more about why the school board abandoned the testing plan, and it involves disagreements with the Sewerage and Water Board.

The Trump Administration has deported almost 85,000 people for about half of this year.

In New Orleans, many immigrants are worried about their future. Hundreds held a candlelight vigil last night to protest deportations.

Civil Rights. Voter ID Laws. Felon Rights. These topics aren’t foreign for teachers and students in Southern classrooms. But what happens when pressure to teach to the test prevents challenging conversations?

New Orleans is known for its enormous Vietnamese population, one of the largest in the country. But we recently came across a story about a now-lost Chinatown in New Orleans — two of them, in fact — and how they came to be. To understand how these hubs came about, and why they disappeared, we have to rewind the clock 150 years, to the end of the Civil War.